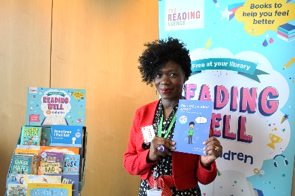 This week is Child Mental Health Week in the UK, set up by children’s mental health charity Place2Be, the week shines a spotlight on the importance of children and young people’s mental health. With 3 children in every classroom in the UK now presenting with a diagnosable mental health problem, this year’s theme is Find your Brave.  To coincide with the week, reading charity The Reading Agency supported by Libraries Connected has launched a booklist to support children’s mental health. The team here at Family Kids & Youth (FK&Y) were delighted to be part of this process. The books were chosen by health professionals from organisations including The British Psychological Society, Mind, NHS England, Royal College of General Practitioners, Royal College of Psychiatrists. FK&Y researchers then took the books to an advisory panel of children and their parents/carers to find out what they thought of them, and subsequently reported back to the professionals. In four extended sessions the book list was whittled down to 33 titles, covering subjects including bereavement, anxiety, managing feelings and diagnosed conditions including ADHD and physical disabilities. The books will be available in all public libraries subscribing to the scheme and can be accessed by school libraries also.

We use cookies to ensure that we give you the best experience on our website. If you continue to use this site we will assume that you are happy with it.